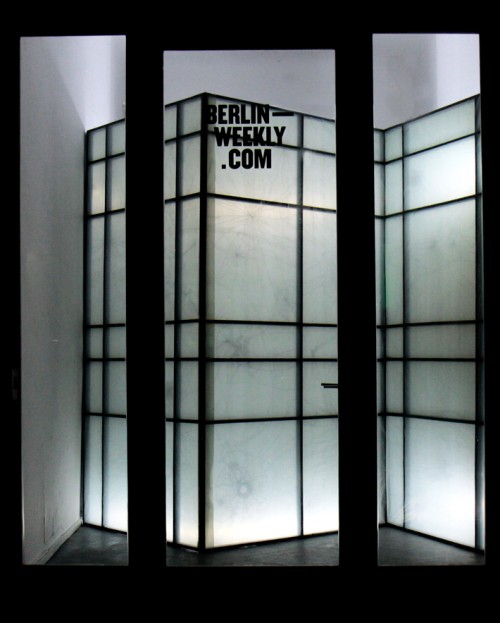 “Ohne einen Glaspalast” (Without a Glass Palace) by Mira O’Brian

This work is an architectural tableau based on the former Palast der Republik. The grid framework is a scale model of a section of the Palast der Republik’s window façade, made to fit the dimensions of the Berlin-Weekly window space. Instead of the famous gold-copper iridescent window panels, a dull grey-green plastic sheeting covers the frame; a material used on scaffolding in construction sites. Shadow-like drawings of broken glass are visible through the translucent layers.

In 1993 a private organization financed the construction of a life-size mural depicting the façade of the 18th century version of the Berliner Stadtschloss. The mural, suspended from scaffolding, was placed on the original footprint of the castle, in Berlin-Mitte. The Palast der Republik, current occupant of this historic plot of land, was conveniently hidden behind a giant mirror, giving the illusion of a continuous Schloss. This former seat of the GDR parliament and communist pleasure dome had stood empty since reunification, awaiting an uncertain fate. The Prussian tableau was intended as a proposal, or even a demand, to not only resurrect the old castle but to tear down the Palast. The scaled-up funhouse format of the proposal did not diminish the seriousness of its message, nor did the curious time-loop of the resurrection. And so some version of the trompe loei’l facade is currently being built.

“Ohne einen Glaspalast” continues in this tradition of architectural tableaus, found useful not only in the making of spaghetti westerns but also the urban planning of capital cities. This tableau stands as a proposal for a future ruin, located in an obscure side-room of a building about to be gutted and repurposed.

The title, “Ohne einen Glaspalast”, is a fragment of a poem by Paul Scheerbart from his book “Glasarchitektur”. The poem was inscribed on the interior of Bruno Taut’s Glass Pavillion, created as a temporary structure for the Cologne Deutscher Werkbund Exhibition in 1914. Taut and Scheerbart’s utopian vision from exactly 100 years ago is taken as a starting point for the conceptualization of glass architecture in O’Brien’s ongoing research.