In her videos artist Nina E. Schönefeld deals with socio-political issues, against the backdrop of a symbolic world of utopia and fantasy, often using visual aesthetics from the advertising and digital worlds. The heroines of her videos are usually female activists. ENEMY WITHIN is about the cultic worship of feminist activism as such –  the installation refers to a conspiracy theory that claims that the suffragette movement of the early 20th century is still active, fighting for gender equality by any means necessary. It is rumored that today’s movement, „The Hacker Suffragettes,“ operates primarily in the field of digital art.

The installation ENEMY WITHIN features an all-purple color scheme. The color purple stands for determination and for the women’s movement as well as for secrecy, for spirituality and mysticism. Purple is also found as a liturgical color in the church – so the installation looks like an altar, in the center of which is the monument ‚MOTHER‘ that keeps the struggle alive. The installation employs an aesthetic that uses elements from AI, gamer and hacker worlds as well as esoteric symbols from conspiracy theories. The activists of „The Hacker Suffragettes“ fight with the same means as their enemies, infiltrating the digital world as ENEMIES WITHIN. 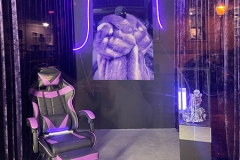 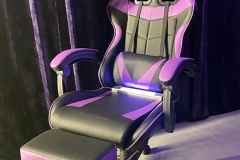 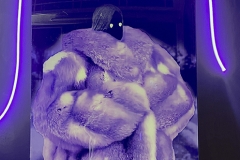 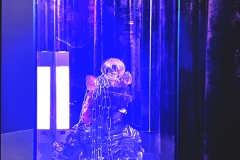