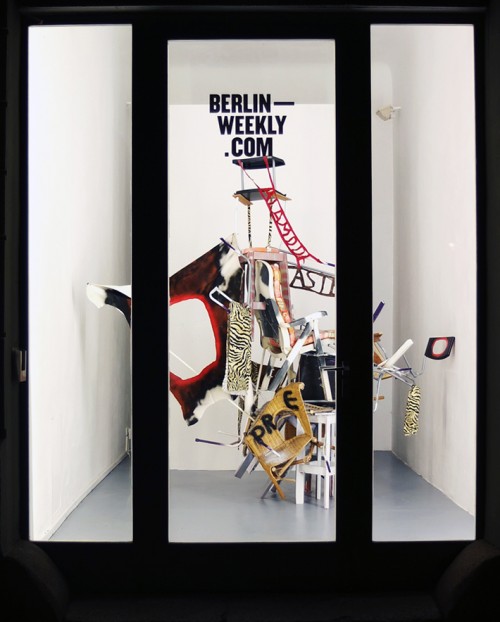 „PreMaster Budding Blaster Theory (Ethno Style)“ is an abstract sculpture which consists of old found chairs, stools, metal rods, words written from old fabrics, paint and ethnoprints. The different materials form a tower of banality which exists as an artistic postulate in the tradition of dadaism, being the antidote of latest trends and tendencies in Art. The pun of the title charges the artwork with humor and underlines its parodistic meaning. Since the artwork also proclaims to be a „theory,” it is involuntarily lifted up on an intellectual, academic level. At the same time this “upgrading” is questioned ironically, as too often these “theories” can be unmasked as a pretentious background behavior.

Sibylle Jazra was born in Heidelberg. She got her BFA at the Gerrit Rietveld Akademie Amsterdam in 1998 and was awarded the Newcomerprize of Kunsthalle Dominikanerkirche in 2003. Among her exhibitions: Kunstverein Heidenheim (2010), Kunsthalle Dominikanerkirche (2006), Kunstraum Bethanien (2010), rc de ruimte Amsterdam (2012). Sibylle Jazra lives and works in Berlin.