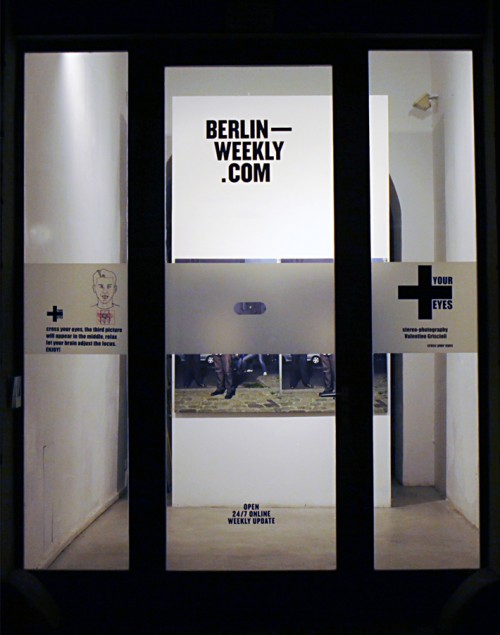 In the last years 3D was rediscovered by the entertainment industry and used with new technologies for movies, animation films, video games, TV etc.. However, it started already in the middle of the 18th century by stereoscopic photography. Valentino Griscioli studied the stereo technique on the original french photographer’s stereopictures of the 1930’s and is adapting this old technique to his personal style.
The installation ‚Inside the outside’, shows behind the glass door of the gallery a 3 D picture of the opposite side of the street. When the viewer looks through the gallery window he will see the street and cafe at his rear, but the scene on the picture doesn’t correspond with reality. The spectator has to cross his eyes and he will see a 3 D picture of the exact location he is standing but from the perspective as he would stand  inside the gallery looking out onto the street. From this perspective he becomes part of the installation himself. Perceiving the 3D picture as a reflexion in the window the viewer will be surprised what is going on behind him.